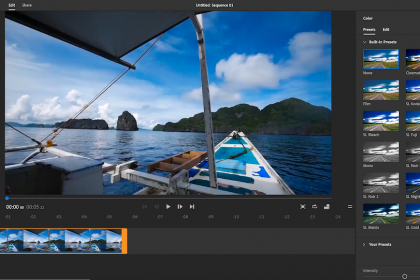 There’s no doubt that Adobe Premiere Pro has earned its place among the tools a professional editor can lean on—Deadpool, Hail Caesar, and Gone Girl are just a few of the big feature films that have been edited on it in recent years.

But could Adobe Premiere Rush, its younger and stripped-down cousin, be a more budget-friendly alternative for video editing?

This article will examine the features and pricing plans for both of these software packages.

Per Adobe’s pricing guide, Premiere Pro’s subscription fee sits at $ 20.99/month in the default monthly plan. However, it also comes as part of the heftier $ 52.99/month Creative Cloud package.

Included in the package, you get 100GB of cloud storage, as well as access to Adobe Fonts, Adobe Spark, Adobe Portfolio, and, important to note, Adobe Premiere Rush.

Adobe Premiere Rush’s pricing structure is a little more complicated, as it comes with three different tiers: a starter plan, a mobile plan, and a single app plan.

Remember that with any free Creative Cloud account, you get access to the Adobe Premiere Rush Starter Version. This comes with unlimited mobile exports on iOS and Android, three desktop exports on Mac and PC, and 2GB of cloud storage.

The next tier up is the Adobe Premiere Rush Mobile Plan, which will cost you $ 5/month. This offers unlimited mobile exports, all of the features in the Starter Plan, 100GB of cloud storage, as well as access to Adobe Portfolio, Fonts, and Spark. It also gives you the ability to sync projects across devices.

Finally, the Adobe Premiere Rush Single App Plan comes in at $ 9.99/month. This offers unlimited exports on desktop and mobile, and all the other features of the mobile plan.

On paper, Adobe Premiere Rush has an advantage over Premiere Pro. While Rush can work across multiple devices, including iPads, tablets, cellphones, and typical desktop computers, Premiere Pro is only available on macOS and Windows.

It’s important to differentiate from the Rush app on smart devices and the Rush software on desktop machines, as Rush’s premium features focus on the unlimited use of the desktop app.

Using the Premiere Rush app on the iPhone 11 is responsive and relatively quick to use, once familiar with the touchscreen interface.

In the app, you have access to a basic timeline for editing clips, as well as workspaces to add graphics, transitions, special effects, color, and clip speed.

Audio-wise, there is also a simplified version of the Essential Sounds workspace. You can find out more about this feature in our guide on how to get better audio with Essential Sound.

You can bring in footage from your camera roll or your Files app on iOS, in theory allowing you to edit footage from an SD card. Impressively, the app supports a wide range of formats, including professional codecs, such as ProRes and DNX.

For on-the-go editing on a smart device, Premiere Rush definitely has some strengths. However, it still doesn’t have the same library of features as the desktop version of Premiere Pro—it leaves out advanced audio mixing and effects, as well as warp stabilization, to name just a few.

The color correction feature in Adobe Premiere Rush on mobile was genuinely impressive, though not as intuitive as Premiere Pro’s Lumetri plugins. One point to note is that the Premiere Rush app relies on creating proxy files in the cloud when handling high-resolution footage.

This means that a high-speed internet connection is essential if you want to be able to edit smoothly without running into considerable performance difficulties. You might want to keep this in mind if you are working on something sensitive.

Premiere Rush is definitely geared towards the casual content creator, and Rush’s desktop iteration is a testament to that. Apart from creating proxies on a hard drive rather than in the cloud, the layout and features are very similar, if not identical to Premiere Pro.

As before, you have access to effects, color tools, audio, and transitions. While testing the software, there did not appear to be any additional features that the desktop version offered over the app, presumably to maximize compatibility between devices.

One interesting point to note is that Premiere Pro’s keyboard shortcuts do not appear to function in Rush. Apart from being able to use the arrow keys to navigate in the timeline, moving clips around can only be achieved by dragging and dropping footage.

Once your project is edited, you can export your video file to a number of presets. It’s worth noting during our test of Rush, all were found to be web formats that use the H.264 codec. This makes Rush less suitable for producing high-resolution videos to be shown beyond online channels.

Premiere Pro is designed for the professional video editor to create video content that can be seen on anything from web video to broadcast and feature film. As a result, its features and customization capabilities far exceed what Rush offers.

It offers fully customizable keyboard shortcuts, as well as input support for hardware such as graphics tablets, VR headsets, and editing consoles. Additionally, it has Adobe Link compatibility, allowing for the movement of assets and sequences between other Adobe apps, such as Adobe After Effects.

It has a wide range of effects, including color keying, warp stabilization, masking, and motion tracking. Premiere Pro also supports the installation of third-party plugins to increase its capabilities and offer advanced effects.

Related: How to Keep Projects Organized in Adobe Premiere Pro

It can export files to several different formats, including specialized files such as DPX sequences for professional color grading. It can work with a versatile range of frame rates, codecs, and resolutions, and also offers the ability to create proxies for faster workflows.

Additionally, it also allows for the export of timelines in formats such as EDL and XML. This lets you migrate projects to other editing and audio software for further post-production work.

Which Video Editing Software Is Right For You?

Premiere Rush feels and acts very much like the beginner’s guide to Premiere Pro, offering a light set of features at a fraction of the monthly price.

Any professional editor is unlikely to get much use out of Rush, beyond perhaps crafting basic assemblies for fine-tuning in Pro. Premiere Pro’s sheer amount of effects, workspaces, and export/import capabilities mean that the chasm between Premiere Pro and Rush is gaping.

For casual content creators and those who are just starting out with video editing, Rush might be the initial software of choice. It feels like it’s in the same bracket as Apple’s iMovie, offering a simple set of tools to make a video product. And it’s in that simplicity that it excels.

Tagged under: Adobe, Premiere, Rush, Should 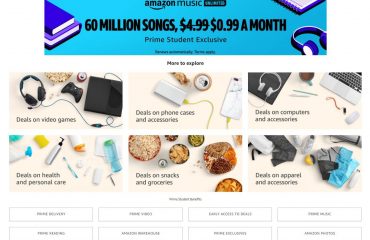 How to Get Amazon Prime Student | MakeUseOf

How to Set Up and Use Parental Controls on Nintendo Switch