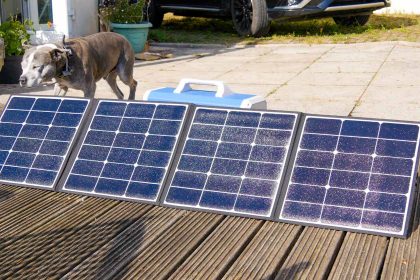 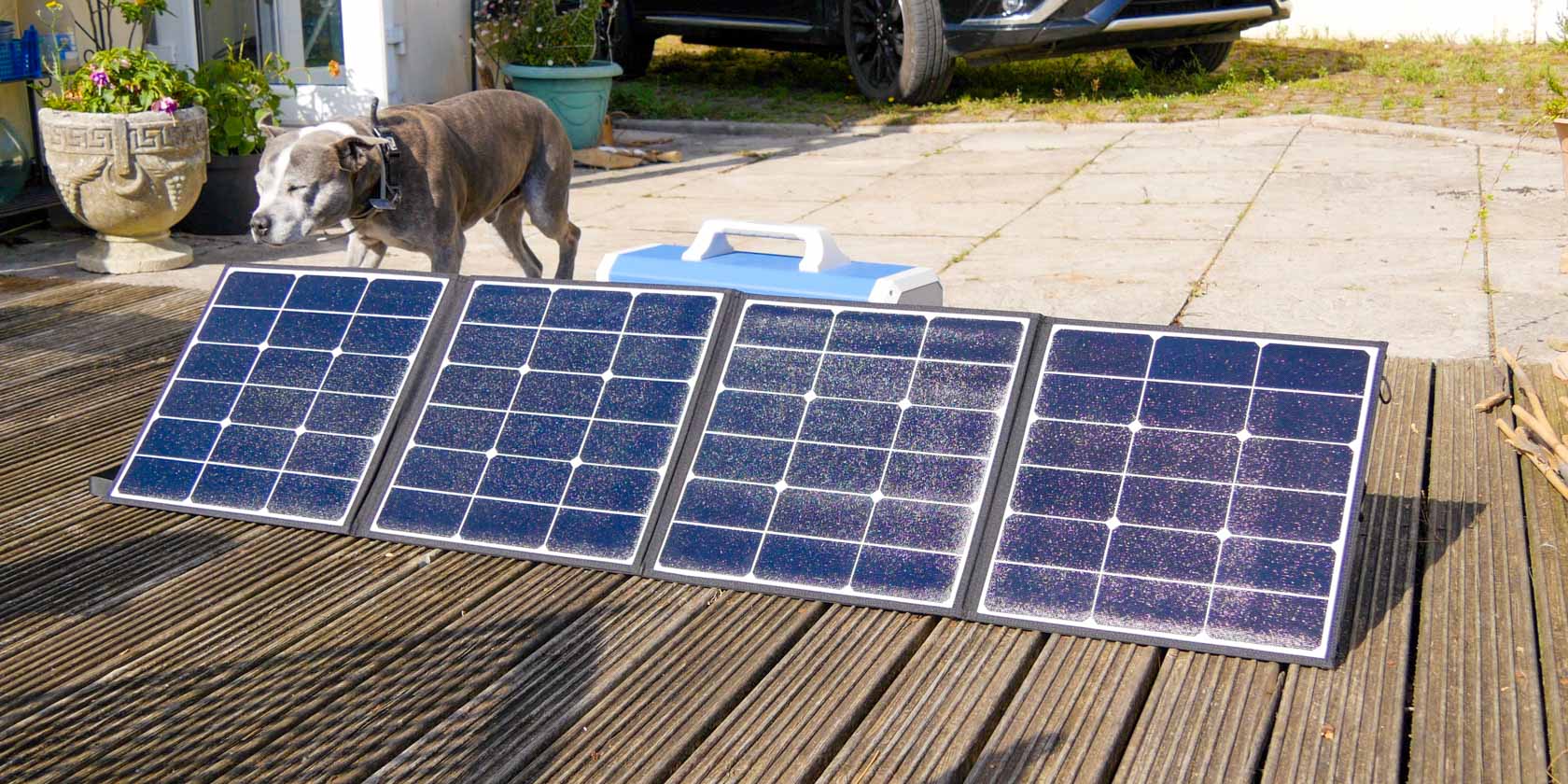 Our verdict of the Maxoak SP120:
Weighing less than 7lbs, the Maxoak SP120 outputs a serious amount of power in a convenient and portable package. You’re paying a premium for the portability though, so consider if you actually need to carry it around or whether a static panel could do the job. 1010

The Maxoak SP120 is both affordable, portable, and with 120W output, powerful enough to charge even the largest of battery storage. It takes less than a minute to deploy or pack away and weighs a mere 6.2 pounds (2.8kg). You don’t get much more portable than that.

Retailing at $ 400 or £300, if you’re quick you can grab one at 30% off during IndieGogo crowdfunding. Those in Germany or the UK can get one even quicker from Amazon (under the PowerOak brand), and use our exclusive £30/€30 coupon–just enter the code makeuseofA at the checkout.

The Maxoak SP120 unclips and folds out to reveal four panels. A convenient carry handle is located on one end, with three loops on the other end for hanging the panels. on the rear of each section is a stiff leg, secured with velcro, allowing you to angle the SP120 up to 45-degrees. Each panel is made of monocrystalline solar cells. These are more efficient than cheaper polycrystalline cells, allowing for greater power from the same size panels. Each panel is coated in ETFE, and Maxoak claims they can be bent to around 20-30 degrees before snapping. This isn’t to say you should make a habit of bending these panels, but rather that you needn’t worry should you accidentally apply a little pressure to them.

The SP120 is IP65 rated, meaning it should withstand some rain, but don’t get it soaked.

The hardwired 3m cable which terminates in MC4 plugs is stored in a zipped side pocket. These are standard solar panel connectors, so you can easily daisy chain a couple of panels together (or even supplement a static panel if you wanted). However, the adaptor cables to feed this into a battery are not included. In the case of Maxoak, the adaptor cable is supplied with the battery, but if you’re pairing this with a battery from another manufacturer, you may need to source your own cable. I found the pocket on the side was large enough to also store the cables that came with the EB240 (MC4 to DC9mm).

One of the great things about being so easy to carry and move around is that you can easily reposition the SP120 to take advantage of the sun any time of day. You can lay the panels flat for the high midday sun, then angle them or hang them vertically for morning or evening. This allows you to get the most efficient charge possible—more so than you would with bulky static panels. Our rooftop panels only start to generate after lunchtime! Of course, you shouldn’t expect it to output 120 watts all the time, but I was able to get a good 8 hours of solid charging on a good day.

How Long Will It Take To Charge My Battery?

Assuming eight hours of good sun per day, let’s say you average 100W; that’s 800Wh total. The Maxoak EB240—which is admittedly an enormous store of energy—holds a maximum of 2400Wh. So that would take about 3 days to charge. For a smaller battery like the Maxoak AC50 (500Wh), you could easily charge it and more, in less than a day.

With standard MC4 panel connectors, it’s easy to daisy chain these panels together and charge twice as fast.

Do I Need a Battery?

Solar technology can be a little confusing at times. Solar panels output a variable voltage depending on the intensity of the sun, which isn’t much use by itself. You need some sort of regulator to fix the voltage at a certain level. Smaller panels that are designed to trickle charge smartphones include a built-in regulator that drops the voltage to 5V (USB).

The SP120 doesn’t include a regulator, so it must be paired with something else before you can utilize the power. Because the amount of power it produces is more than you’ll usually use, the best thing to do is to put that power into a battery.

A battery backup like the EB230, EB150, AC200, or AC50 incorporates a voltage regulator, battery, and AC/DC converter. It takes the solar output, stores it, and converts that power to whatever voltage you need later. That might be 110V AC, 45W DC for your laptop, or 5V USB for your smartphone.

Should You Buy the Maxoak SP120?

As a portable solar panel, it really doesn’t get more convenient than this. 120W is a good amount of power and paired with a convenient travel battery like the AC50, you have an unlimited source of power for your adventures and off-grid needs. But consider if you really need to carry a solar panel around, because you’re paying a premium for the privilege. A similarly specced or even higher efficiency static panel can be purchased for $ 150 or less. That means you’re paying about three times as much per watt as the price of being ultra-portable. If you’re considering the SP120 to carry between your home and cabin in the woods, for instance, you might be better off buying two higher-powered rooftop panels instead.

Grab yourself a bargain on the IndieGogo now. But be quick, there are only a few days left on the campaign to get 30% off.

Thanks to Maxoak, we have not one, but THREE portable solar panels to give away, to winners in the US, Germany, and the UK. Enter below for your chance to win! 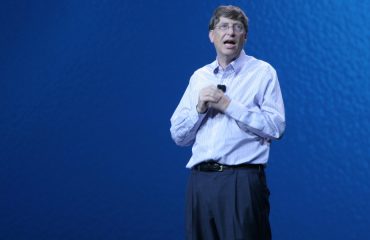 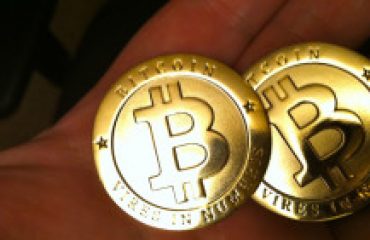 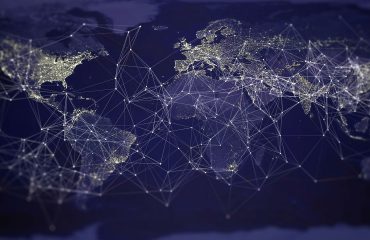 What Is a DNS Server and Is It Responding?