5 Workspace Apps That Use Smart Tables to Manage Data

5 Workspace Apps That Use Smart Tables to Manage Data 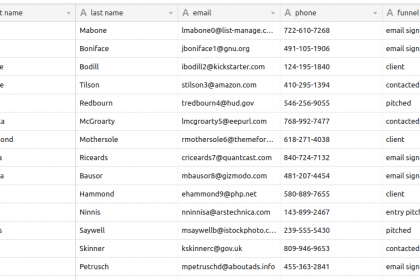 Traditionally, most productivity tools gave you a fixed set of features. For example, a checklist might give you due dates, attachments, and percentages. But if you wanted more features, you just had to wait and hope.

Airtable is the original tool that started the trend. Airtable revolutionized productivity tools by giving a spreadsheet the powers of a database. That’s just where it started, though.

Airtable also added the ability to easily change views from a basic spreadsheet-style grid to a kanban board, calendar, or gallery. Then it added several apps that can use that data in creative and productive ways. Airtable even gave users the ability to create their own apps.

In order to test the waters, let’s generate some mock CRM (customer relationship management) data and import it into Airtable.

Looking at CRM Data in Airtable

Airtable gives you a lot of options for importing data. When importing CSV (comma-separated value) data, you have an option of letting Airtable automatically generate column types. However, Airtable didn’t recognize any of the column types based on data we gave it.

Notion is a note-taking and personal wiki tool. It came out a few years after Airtable and was probably heavily inspired by it. Airtable has smart tables at the center of its offering and provides tools based on them. Notion, on the other hand, uses smart tables as one aspect of a full-featured note-taking program.

In other words, Airtable is a smart table tool with other tools added on. But Notion uses smart tables as part of its offering.

You can add a kanban style board in three clicks. Notion automatically uses tag data to build the columns.

Area 120, Google’s incubator, has released an attractive alternative to Airtable called Google Tables. It offers all the basics you’d expect from a smart table tool.

What’s exciting about Google Tables is that it’s part of Google and could work with other Google tools in the future. There are some amazing possibilities available when you think about tying all of Google’s services together in a coherent way.

Until that happens, you can use Google Assistant and IFTTT to accomplish amazing things.

On the other hand, this is Google we’re talking about. Google is notorious for killing off its products. At the time of this writing, Google has killed off 219 of its creations like Reader, Wave, and Notebook. You can see the full list at the Google Graveyard. So, as exciting as this tool seems, you shouldn’t get your hopes up about its life in the long term just yet.

Looking at a CRM in Google Tables

Google Tables made importing the data easy. But there is no special field for phone numbers and email addresses, so they’re just text. It figured out that the funnel location field is a multi-select table. But it didn’t auto-assign colors, even though colors are available.

Switching to kanban view is only two clicks away. The results are solid and functional.

JotForm is doing something slightly new and totally revolutionary. It has added smart tables to an existing product, giving it superpowers.

JotForm has been around for 14 years, serving up forms similar to Google Forms but way more powerful. JotForm does one thing, and it does it really well.

Related: The Best Guide to Google Forms You’ll Ever Find

By adding smart tables to its offering, JotForms has expanded its tool’s capabilities without losing sight of its original purpose.

Before, when someone submitted contact information through a form, you’d have access to the information. But now, you can use that information as the foundation of a CRM. For example, you can tag data, schedule follow-ups, and connect contact data to purchase forms.

How Would JotForm Handle a CRM?

JotForm is a form-first tool. While you can manually enter customer data, it feels more natural to make a form for your customers to fill in themselves. Or, someone on your team could fill in the form.

Importing data is similar to Airtable. Field types have to be manually selected. And while JotForm does have phone-number and email fields, those options weren’t available during the import process. Upon import, JotForm also added a few data fields to better track form entry. But those are hidden in the screenshot.

Once imported, the data looked clean, and the funnel location tags were auto-colored nicely. JotForm doesn’t have a kanban view. It has a cards view that’s similar to Airtable’s gallery view but doesn’t sort by columns.

Where JotForm really shines, though, is with how easy it is to turn smart table data into a form. It only took two clicks to create an attractive and functional form from the imported data.

In order to make table data compatible with its existing data, JotForm obviously had to make a few tradeoffs. In spite of that, adding tables to its services was a smart move that would be nice to see in more products in the future.

Smartsheet leans heavily in the spreadsheet direction. In fact, if you’re familiar with tools like Excel and Google Sheets, Smartsheet should be fast and easy to pick up. It’s possible to push a spreadsheet to do things like act as a Gantt chart or scheduling tool. But that’s a real stretch, and the results will be less than stellar.

Smartsheet, on the other hand, makes advanced usage intuitive and easy. Smartsheet provides everything you’ve come to expect from a spreadsheet. And it has many of the features you’d want to see in a smart table.

Importing data was a snap, and funnel location data was recognized as single-select data with no problems. There are no dedicated column types for phone numbers or emails. But there is a contact list column type that would greatly simplify creating a CRM.

Smartsheet has a clean Card View that works just like a kanban view. And it’s a snap to switch between it and table view.

Smart tables are still a relatively new concept in productivity technology. A lot of tools are jumping on the bandwagon. But they’re still finding their footing.

Microsoft Lists would have been a great addition to this list. It’s most similar to Airtable and Google Tables. But it was only available as a Windows download at the time of its release.

Rows aims to evolve the spreadsheet, making it more like Smartsheet than Airtable. It provides integrations, collaborations, and an API. At the time of this writing, signup puts you on a mailing list. But this tool definitely looks like it’s worth keeping an eye on.

ClickUp is an all-in-one productivity tool that uses many of the features of smart tables but in the form of task lists. ClickUp provides additional columns, list linking, and alternative views like most smart tables. But it still lacks some of what you’d expect to find in something like Airtable.